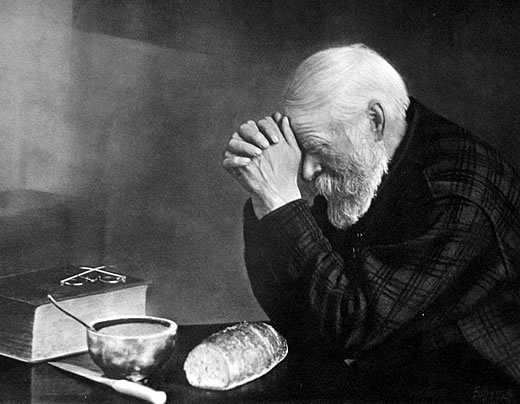 There’s more to bread and salt than meets the palate! 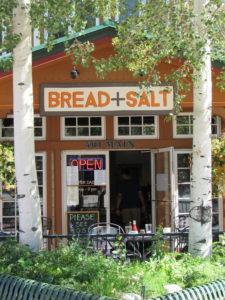 This adventure started a couple of years ago when I happened upon a restaurant in the mountain town of Frisco, Colorado. There on Main Street in that pristine and quaint community rimmed with purple peaks all around, hung a sign denoting Bread+Salt. That sign immediately captured my attention. 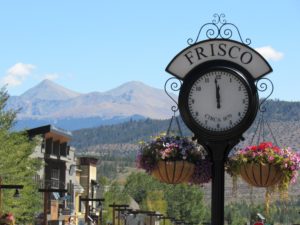 Bread and salt? From the sidewalk I wondered if that charming restaurant featured anything else. As it turned out, there were many delightful and savory entrees on the menu but the name of the restaurant implied a boatload of history and good will I knew nothing about. And so began this exciting trek into the cultural and symbolic implications of those very basic commodities—bread and salt.

The gift of bread and salt is an age old custom of good will in many Slavic, European, and Middle Eastern cultures. It’s frequently bestowed as a welcome greeting and to commemorate a marriage, a baby, or a new home. Salt is placed in the center of the loaf for dipping. Various creative designs and pastry cutouts usually adorn the top of the bread. It’s simply beautiful. 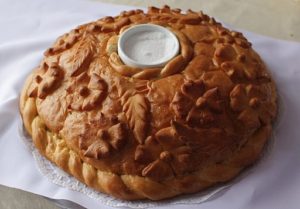 Bread sustains the body. Staff of life, bread of life, breaking bread together are well known expressions that have practical and philosophical significance for many people. Salt not only enhances flavor but it preserves and purifies. Expressions such as salt of the earth often connote something of value. When bread and salt are paired together in an offering of good will, the gift frequently exemplifies a union of practical and spiritual symbolism. The gift of bread is intended to sustain the body, salt intended to preserve and purify the journey.

This making of bread is an age old tradition extending back to ancient days when native people scraped seeds and roots against a grinding stone in the wilderness. At an archaeological site in Romania, Neolithic people boiled salty spring water to extract the salt in 6050 BC. Charred flatbread crumbs from wild wheat, barley, and plant roots between 11,600 and 14,600 years ago have been found in the Black Desert in Jordan. One study by the National Academy of Sciences in 2010 found trace residue of cattail roots and ferns ground in pestle-like rocks as a type of flour mixed with water. That prehistoric paste was then cooked on heated rocks.

Imagine what it takes to find and then grind a particularly remote root between two carefully selected rocks, mix in a bit of water, start a fire, and cook on a searing hot stone!

Pliny the Elder wrote about the Gauls and Iberians skimming the foam off beer to use as a type of fermentation. Other ancient bread making methods included pouring the crushed fruit of grapes (grape must) into flour to start fermenting, and steeping wheat bran in wine as a source of sugar for yeast. Ingenuity and resourcefulness were necessities for survival.

Of course that labor intensive process has been improved through the ages with leavening agents such as sour dough starters, saleratus, baking soda, and finally yeast. But back in ancient times, the old ways of making bread ensured food for the hungry.

Salt quickly became one of antiquity’s main commodities for trade and commerce by the Hebrews, Greeks, Romans, Byzantines, Hitites, and others. It was often used to seal the deal. In war times, salt was scattered over a defeated region to prevent anything from growing. Interestingly, the word salary comes from the Latin word for salt. 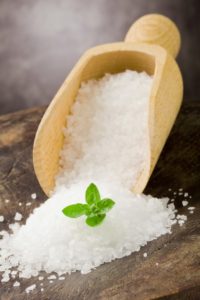 On a religious note, salt is significant to a variety of faiths such as Christianity, Judaism, Hinduism, and Buddhism. Many references to bread and salt can be found in the Torah and in the Old Testament and New Testament of the Christian Bible:

Then the LORD said to Moses, “I will now rain down bread from heaven for you. Each day the people are to go out and gather their daily portion; thus will I test them, to see whether they follow my instructions or not.”—Exodus 16:4

“Very truly, I tell you, it was not Moses who gave you bread from heaven, but it is my Father who gives you the true bread from heaven. For the bread of God is that which comes down from heaven and gives life to the world.”—John-6:31

Salt is good, but if it loses its saltiness, how can you make it salty again? Have salt in yourselves, and be at peace with each other.—Mark 9:50

Wow! Profound pictorial references found in the amazing frescoes in the Catacombs of Domitilla and San Callisto of Italy reveal ancient Rome back in the day including the importance of bread both in Christian and pagan cultures. Some of those frescoes highlight how grain was transported on boats from the Mediterranean. 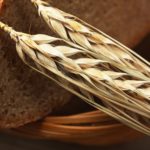 Ah, the aroma of freshly baked bread lilting warm from the oven fills any kitchen with something akin to love! No matter if it is unleavened, risen, rolled, or braided, bread is fundamental to our existence. Breaking bread together is a testament to friendship and alliance. And salt truly enhances the bond and flavor. So yes, I am grateful for that Bread+Salt sign in the village of Frisco, in the Summit of the Colorado Rockies. It became a catalyst for me, a sort of intellectual yeast to learn about the origins of this time honored tradition.

And yes, I’ve been making a lot of bread lately, not with a contemporary bread machine sold in those glamorous cooking stores around town, but rather a sort of back-in-the-day primitive hold-your-breath let’s see how this comes out approach with my own two hands…in a bowl, on a floured surface, mixing a gloppy clump of flour, yeast, sugar, egg, and liquid into a sticky ball, and then (with a little good fortune) kneading it into a well-formed malleable consistency better known as dough.

Just in time to celebrate a new little life. 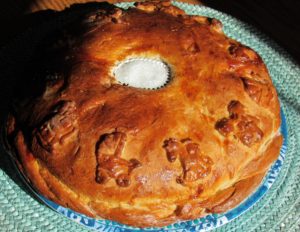 Thanks for stopping by! ♥