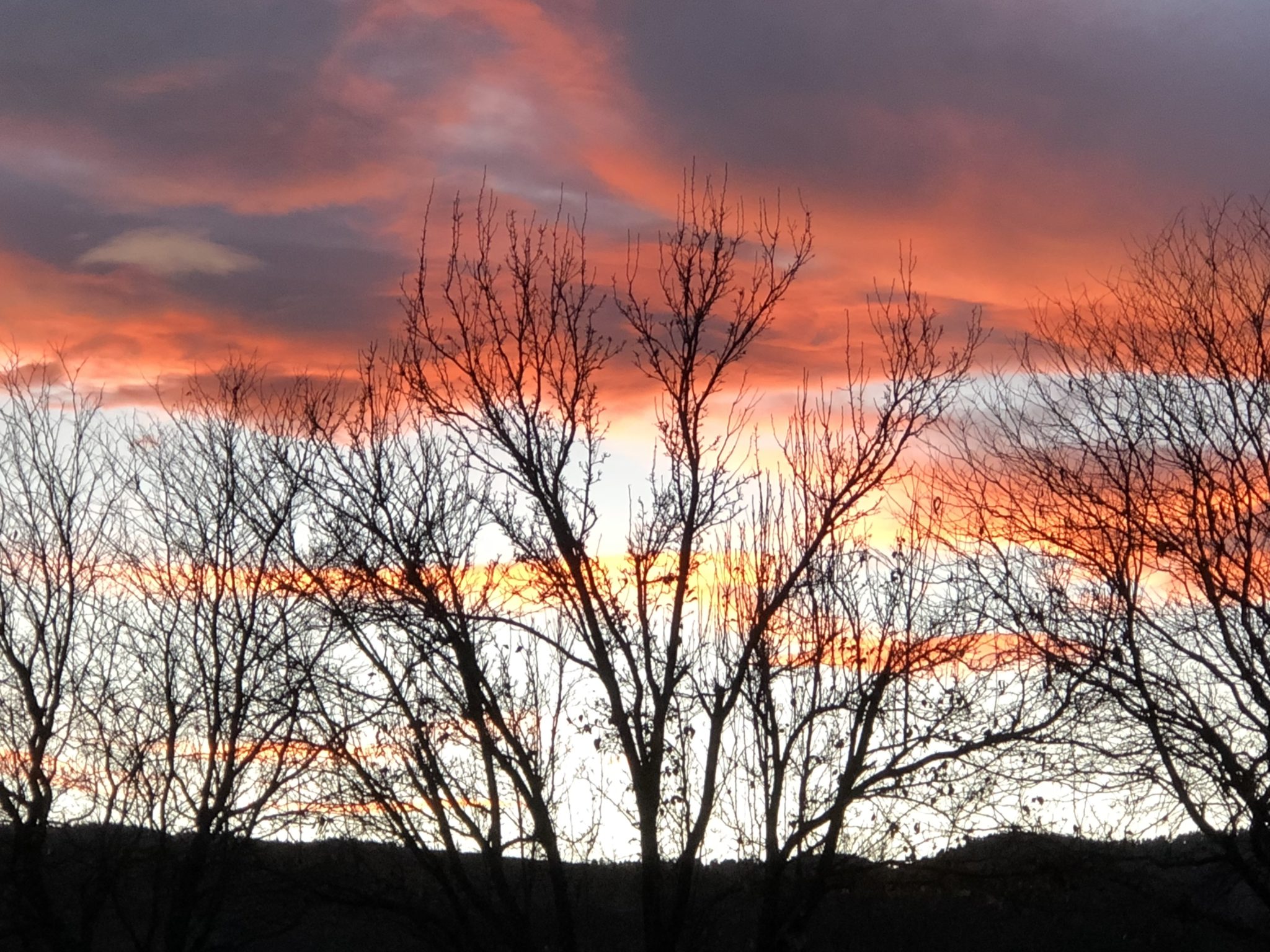 Now that the gorgeous shimmer of autumn leaves has been whisked away by the late November wind, the stripped branches appear as bare wooden hangers or bone-sparse skeletons. As I headed west out of my neighborhood one late afternoon, I noticed the incredible sky. Those spindly naked trees became the dark silhouetted contrast that enhanced the profound glory of an autumn sunset. Indeed, the trees looked to be reaching to the sky for the colors that had vanished from their very arms. 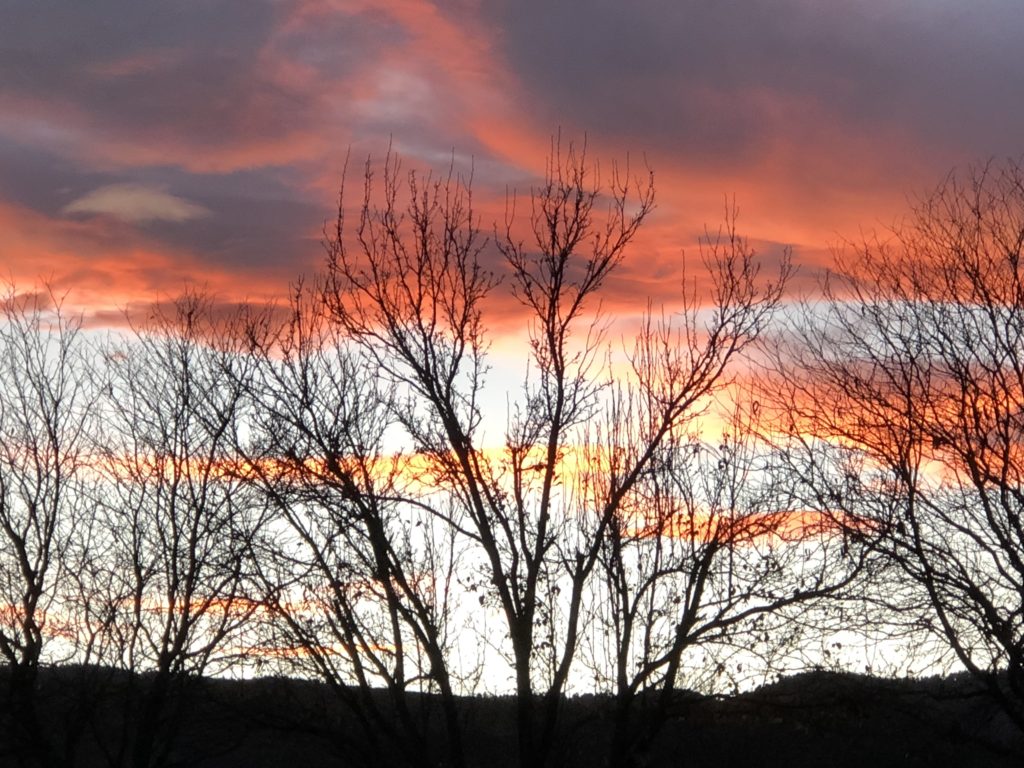 I love the celebration of Thanksgiving. It’s a holiday that settles in with reflections of gratitude and tranquility without a lot of fanfare about gifts or purchases. The solitude strikes me as a quiet space to be savored before the roar of Black Friday.

I must admit, I ventured out to a retail store on Friday. The store was slammed. Lines trailed off into the aisles. Behind the jewelry counter labored two clerks attending to a multitude of customers. People had been waiting a very long time. One elderly clerk struggled to unhinge the clasp of a watch for a customer. Her swollen knuckles and the angled bones in her arthritic hands could not easily unlock the latch of that stubborn timepiece. Her curved back remained bent as she glanced up and patiently assured the waiting patrons that she would be with them as soon as possible. I couldn’t help noticing her lined and weary face, the expression in her earnest eyes, and the quiet reassurance of her words. In the flurry of a crowd trying to stretch every dollar as quickly as possible, she seemed to understand whatever intolerance was leveled her way. The haste and chaos of super deals and coupons did not hinder the dignity she so clearly exuded.

Days earlier at a phone store, a young employee in his late teens/early twenties helped my husband and I with the electronic mysteries of cellular communication! The store was about to close for the evening and yet the young man continued to work past store hours to figure the numbers of the phone plans we considered. We sat circled together around a table to work out the details. Suddenly, the young man looked up from his numbers to the television monitor on the wall. “Not again,” he said horrified as his head slumped downcast, “Not again. That’s why I don’t watch the news. It’s too depressing.” Too young to be so wearied, I thought sadly and yet I knew perfectly well that he was devastated by the report of yet another shooting tragedy, another sexual predation uncovered, another…

At the Doc’s office this month, a couple in probably their late seventies shuffled across the carpet to sign in. They crouched over the counter in tattered sweat pants and old shoes and spoke to the receptionist before coming towards me. The man eased himself down in the second chair to my right and filled out a medical questionnaire. His wife lowered herself directly beside me, her elbow touching my elbow. She tilted her head and peered at me through thick glass spectacles that rested on her nose. She was thin and wrinkled and the bottom row of her teeth was completely missing but she flashed me a generous smile.

“Do you have trouble picking up clothes from the floor?” her husband read loudly from the medical questionnaire on the clipboard. He chuckled. “How about a penny or a nickel?” he improvised aloud.

The wife glanced to her husband and said to me, “I’m the one who picks up all the clothes from the floor. I’m the only one who cleans!”

The wife looked back to her husband and they both burst out in a jolly exchange of laughter as if that were the best joke ever told on earth.

Sometimes I think I am a very lucky person. Who was I to be sitting next to this angelic pair who sparkled and sprinkled their joy like stardust in that stuffy medical office? Their delight in each other and in the moment was downright catchy. 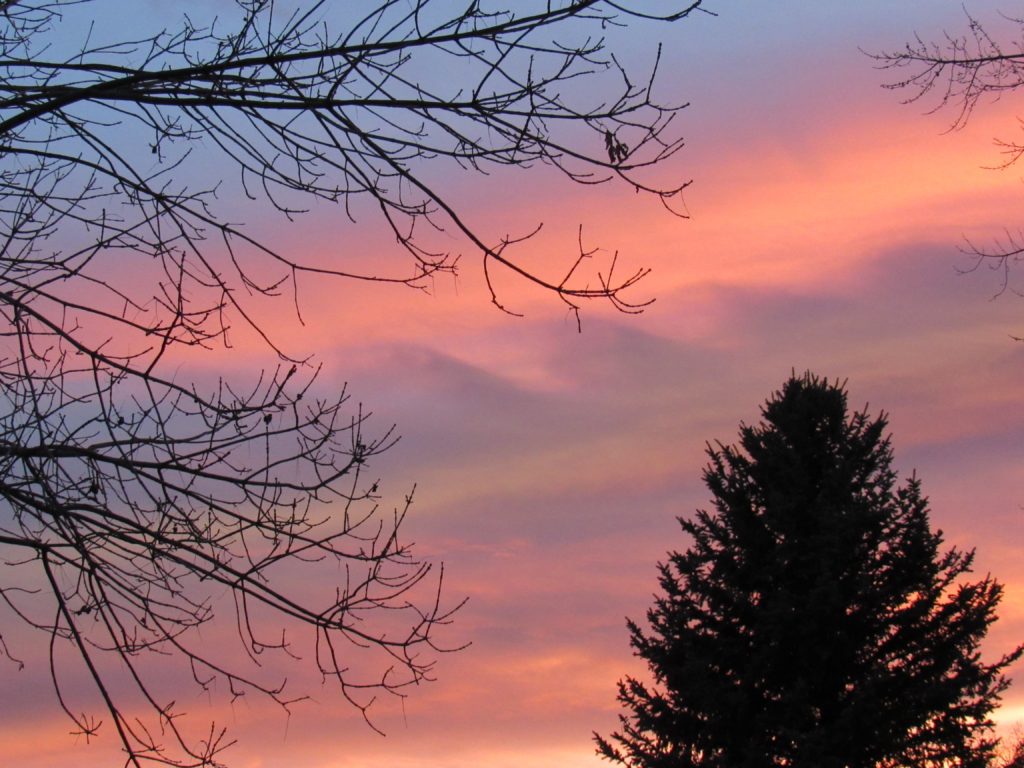 And so I reflect. Isn’t it the little things that get us through the day when sometimes humanity seems to have been stripped bare like the leaves from the tree? Even as disappointment lingers in the latest turmoil of the times and the days darken steadily in the procession towards winter, I want to remember that people can be lights to other people. I am keeping the images of those dear November faces close to my heart. I want to remember the stripped branches reaching up to the magnificent lights of sunset, reaching up to heaven.

Thanks for stopping by! ♥