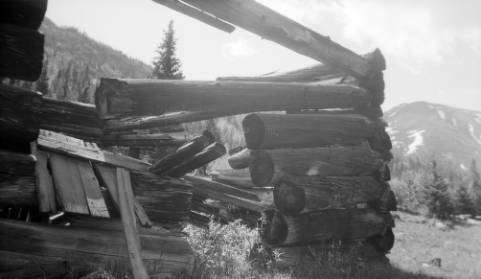 Out here in the West, it’s common to see old barns, cabins, or piles of debris across a field or at the edge of a developed lot. The wood timbers have simply decomposed over time in all kinds of weather and have fallen to the earth. 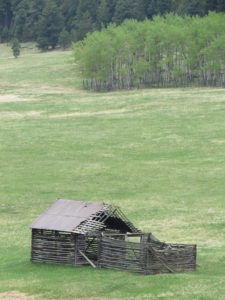 Whose hard-working hands cut the trees, sawed the logs, notched and chinked the frame into being? What hopes and dreams lay cradled in the remains of those composted dwellings? What stories waft up like a homemade stew from the crumbled hearthstones of the past? It’s just plain intriguing to imagine the souls that built and lived in those long-ago homesteads scattered across the land.

There’s a path in Rocky Mountain National Park that follows the Colorado River to a meadow surrounded on three sides by the Continental Divide. Years ago my family ventured on that Colorado River Trail into the deep forest where the headwaters of the river begin. 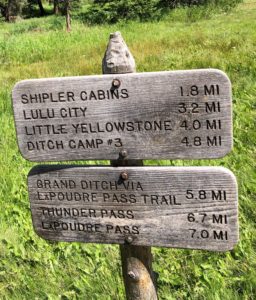 My young children’s legs hopped and skipped over the rocks and logs for 3.7 miles each way from the trailhead to a meadow that once hosted a town of prospectors, miners, and merchants all seeking wealth by blasting, digging, and/or panning for precious ores and metals in the 1880s. 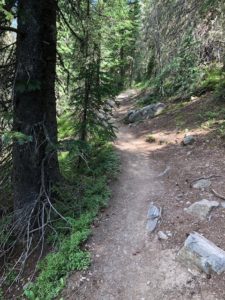 The town sprung up in 1879 between Specimen Mountain and the Never Summer Range and was called Lulu City after the daughter of one of the founders. The weathered sign below indicates Lulu City’s population at 200 which in its height included a butcher shop; real estate agency; mining exchange; hotel; general store; barber shop; grocer; liquor store; and forty houses. Stagecoaches from the plains and nearby Grand Lake traversed the isolated mountains to Lulu City two to three times a week. 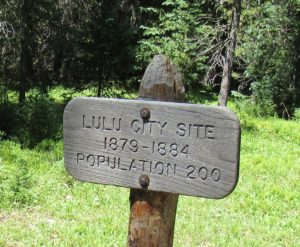 “This is it?” my kids asked disappointed over the few remaining dilapidated logs in the meadow. “This is Lulu City?”

What was barely visible in my children’s eyes when they were young has almost completely vanished today. But when my husband and I hiked to the site a couple of weeks ago, we still found some evidence of the town beneath the overstory of pine trees and grasses in the meadow. 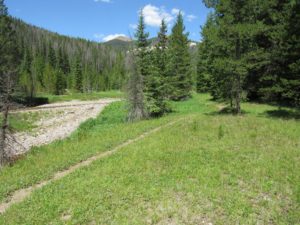 Did this grizzly bear trap really hold a bear? And yes, grizzlies thrived in Colorado in the 1800s when Lulu was a boom town.

Notice the hand-augured holes drilled into the horizontal and vertical wood in the current photos above. Only a few logs remain today in the footprint of the trap which featured a sliding trap door to enclose the bear. This was a fortified trap with double-layered logs braced between firmly-rooted pine trees.

As exciting as it was to find the bear trap and the few decomposing logs and foundation stones at the Lulu site, I felt a lingering sadness in what was ghosted long ago.

I consider the lives of prospectors, miners, soiled doves, and merchants who were seeking a better life.

Often, they were dirt poor and down on their luck. Living conditions were meager at best and cold and dangerous. Lulu City did not pan out the way many had hoped. The ore that was gutted from the land proved unprofitable and too cumbersome to transport to smelters far away.

The town dwindled by 1883. The land did not give them what they so deeply desired. Sadly, what they left behind in abundance were mounds of rock waste in the form of toxic tailing that dot the landscape high and low. It’s distressing to see these stains on the environment today.

And it is important to remember that long before the gold- and silver-seekers erected the fleeting town of Lulu City, indigenous people inhabited these lands, raised their families, and made a life in this wilderness. The long lineage of native dwellers from ages past continue to grace these mountains as a people who revered nature and loved the earth. I honor their heritage as a source of inspiration today. Unfortunately, the quest for prosperity has the capacity to betray humanity at its most fundamental levels. We remember the Utes removal and displacement from Colorado to Utah in September 1881 away from their homeland.

Now, of course, the land at Lulu City is part of Rocky Mountain National Park and is a protected environmental resource. I am thankful for the beautiful land and waters and wildlife that remain untouched.

Just before starting back on the return leg of our hike, my husband spotted something growing succulent and bright red on the delicate floor of the meadow… Ripe wild strawberries! I let the juice of those sweet berries linger on my tongue for as long as I could savor them and realized quite immediately that this was a beautiful gift bestowed in the lap of the surrounding mountains.

In gratitude for all that is wild and pure and lovely.
Let’s keep it that way. 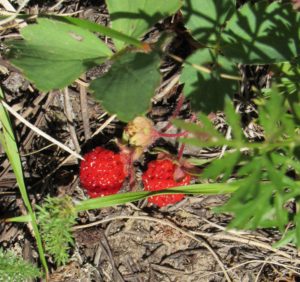